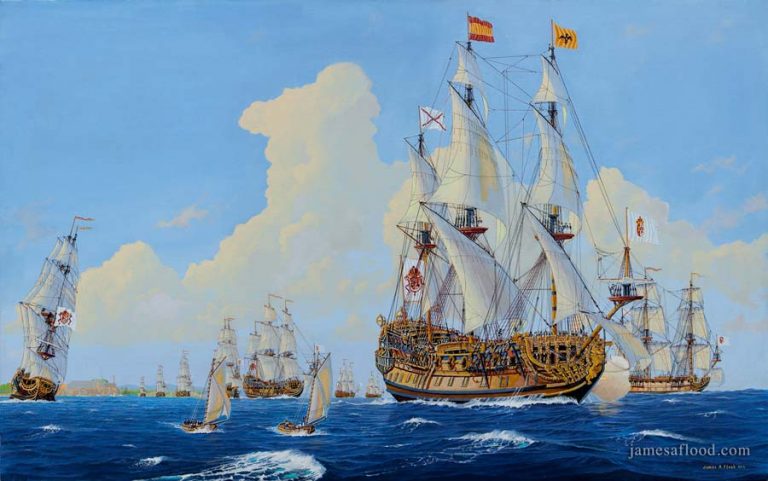 The Spanish Treasure Fleet is portrayed here at long last departing Havana Harbor. After numerous delays and loaded with treasure, the various fleets met in Havana to group together and sail for Spain. The armada comprised of eleven ships, ten Spanish and one French. HMS Hampton Court (renamed Noestra Seniora del Carmen by the Spanish) was their flagship. The date was 24 July, 1715. The end of the month would find all ships but one, a lone French ship that had accompanied the armada, lost in a hurricane just off the East Coast of Florida. HMS Hampton Court though mortally damaged, had capsized near land. Survivors made it to shore, and Spanish ships arrived much later to gather what they could of the lost treasure. Much of it, however, was lost to the sea and can still be found by avid treasure hunters to this day.

This painting is first in a series by artist and historian James A. Flood commemorating the 300th Anniversary of the sinking of the Spanish Treasure Fleet off the East Coast of Florida in 1715.

This painting portrays the festive and joyous event of the fleet sailing out of Havana Harbor late in July, 1715. The flagship is in the lead firing her salute to El Morro as the fleet departs. Several yachts have sailed with the fleet to see them off. The weather is fine, the mood optimistic.