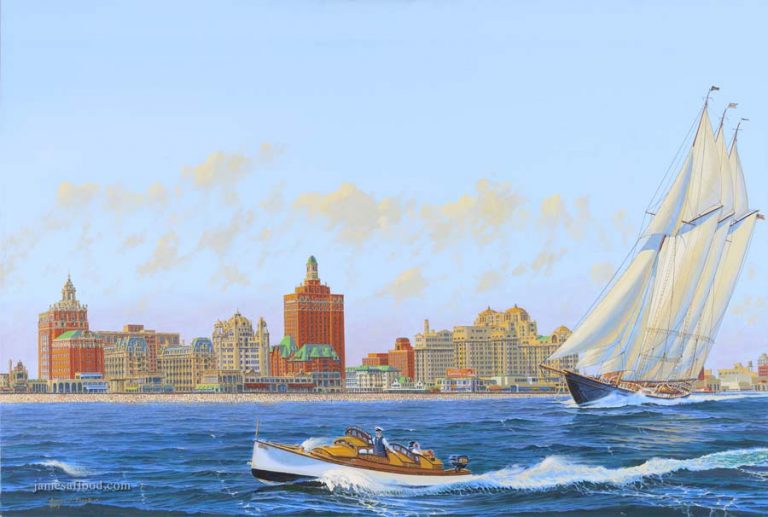 In the late forties and early fifties Atlantic City was a place of wonder for the artist as a young boy. Only happy times and always happy times, he was swept away by the magic of the architecture and spent many a blissful hour wandering along the boardwalk. Atlantic City Remembered has been waiting to be painted for many a year.

This painting depicts the Atlantic City Skyline as it looked in the 1930’s. Starting from the left is the Warner Theater (1929) followed by the Shelburne Hotel (1926 ,Warren & Whitmore). Next stands the Dennis Hotel. Its construction, initiated in 1860, was one of evolution as it continued to expand over time. Styled in Beaux-Arts Baroque, it is known for its courtyard gardens and an elegant dining hall that overlooks the sea. Next stands the Marlborough-Blenheim Hotel (1906), famous for its High Tea that inspired the song ‘Tea for Two’. It was the first major hotel made of reinforced concrete, the building of which was supervised by Thomas Edison himself.

Connected to Blenheim is the Marlborough House (1902). Built in Queen Anne style, it nestles quietly near the stately Claridge Hotel (1930). Standing in broad shouldered splendor, the Claridge was for years the tallest building in the city. Happily to date, it too is still preserved. Across the street to the right stands the Brighton Hotel, known for its English gardens and for its world famous Brighton Punch. In the back and to the right of Brighton is the sturdy red brick Madison Hotel.

About the Yacht Atlantic

To the right of the Traymore and masking the Hotel Knickerbocker and the Chalfonte Haddon Hall, sails the famous yacht Atlantic, holder of the all-time record for a 24-hour run: 341 miles at 14 knots. Here she is depicted heeling to a fresh westerly breeze coming off the Absecon salt marsh and bay. In the foreground, the artist and his wife can be seen motoring in their launch Duchess of Portsmouth as they jockey for a position to photograph the scene for posterity.

The beautiful yacht Atlantic – then and now