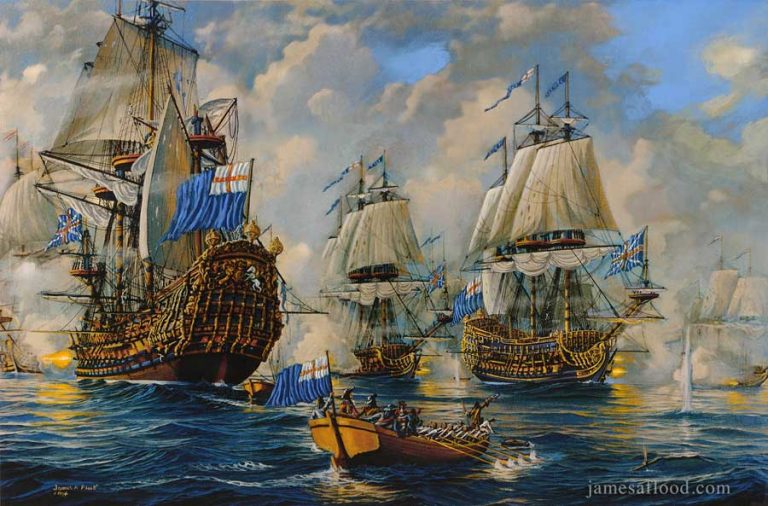 This fine art paper digital reproduction print of an original painting byJames A Flood has been professionally manufactured in the United States of America.

Painting of The Battle of Texel, 1673

The Battle of Texel during the third Dutch war took place just off the Dutch coast August 21, 1673. The Dutch fleet consisting of approximately 75 ships of the line was under the command of the accomplished Lieutenant-Admiral Michiel de Ruijter. The opposition was an allied fleet of approximately 30 French and 60 British ships and was destined to be one of the brief and unsuccessful alliances between the French and the British. This unfortunate allied fleet was commanded by Prince Rupert, cousin of King Charles II. Under him, the French fleet was led by Vice-Admiral d’Estrées, the British by Sir Edward Spragge.
In this battle, the third one that year, the Dutch were strategically positioned just offshore. When the Allied fleet was discovered approaching on August 20, de Ruijter prepared immediately for action. However, the wind was offering the Allied fleet a superior position, and the Dutch sat still, too near shore for the Allies to dare approach.
The following day brought a more favorable wind for the Dutch, and de Ruijter initiated an early and bold attack. On the Dutch side, Dutch Admiral Adriaen Banckert commanded the front, de Ruijter the center, and Dutch Admiral Cornelis Tromp the rear. On the Allied fleet, Rear Admiral de Martel commanded the French in front, Rupert in the center, and Spragge the rear.
The Dutch fleet, though outnumbered, had more going for them than the wind and an experienced Admiral. From the onset several factors worked against the Allied fleet. To begin with, communications between the French and the English were severely hampered by an age-old underlying hostility. Sealing this disadvantage was a letter in the possession of the French Admiral d’Estrées. It was from King Louis XIV and requested that the French minimize their involvement to keep their ships from being damaged. Using just a fragment of his fleet, de Ruijter was able to rapidly dispatch the French at the onset. The remainder of the battle concentrated on the British. With the strongest of the Dutch fleet upon them, the situation deteriorated even more for the British when Admiral Spragge took it upon himself, without orders, to hold back the rear in order to engage in direct battle with the Dutch Admiral Tromp, against whom he held a personal vendetta from earlier battles.

In this painting, Sir Edward Spragge is depicted being rowed towards the Royal Charles, his intended third change of flagship after the first two had been damaged beyond use during the long summer day battle. All is soon to end for him in moments when a canon ball strikes and everyone onboard the longboat perishes.
To note: Spragge was so obsessed with vengeance that he at one time publicly promised the King of England that he would return with Tromp, dead or alive, or forfeit his own life in trying. In his determination, Spragge recklessly held back the rear of the battle line in order to draw Tromp into battle. By doing so, he separated the rear, adding greatly to the confusion, and contributing to the loss of lives. He did, however, keep his word to Charles II, and lost his life in the battle. Shortly thereafter, however, Rupert saved the day by skillfully rejoining the British forces and driving the Dutch into retreat.
The historical information above was derived primarily from the book Influence of Sea Power Upon History 1660-1783 by Alfred Thayer Mahan ©1890