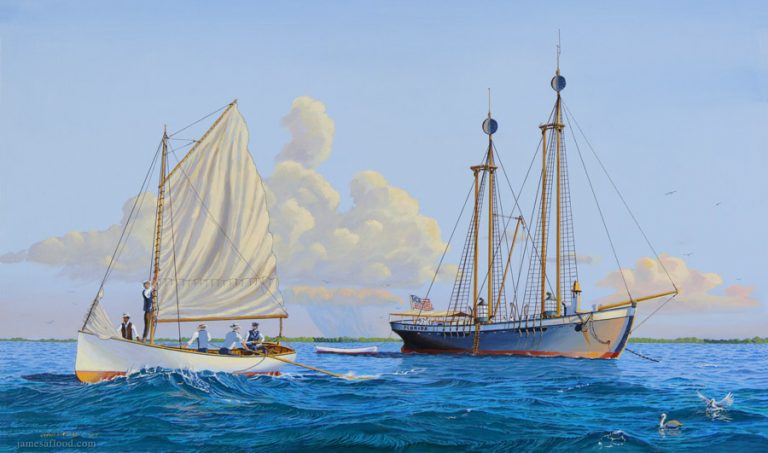 “Going for Wood” the Carysfort Reef Lightship Florida, a tale from the South Florida Keys:
Written by and based on historical research by author Neil Hurley in his book Lighting Carysfort Reef, Volume 1, the Lightships. Painting for Neil’s book (above) by James A Flood.

Neil Hurley’s writing below  is presented here with his permission.

Captain John Whalton and four crewmen from the Lightship “Florida” stationed at Carysfort Reef, Florida, left the lightship to collect firewood at Garden Cove, Key Largo. Soon after landing, Whalton’s party were attacked by a group of six Seminole Indians. Whalton and one of his crew were shot and killed. Two of the remaining crew were also wounded but all three escaped in the boat. The dead men’s bodies were recovered later in the day by the crews of local wrecking schooners.
This painting depicts Whalton’s departure from the lightship. John Whalton sits at the tiller of the lightship’s tender as the crew hoists sail for the six-mile trip to shore. Garden Cove on Key Largo lies on the horizon underneath a passing storm cloud. On board the Lightship Florida are Captain Whalton’s family who were visiting the ship from Key West. Shown are his wife, Felicia, age 41, daughter Amelia, 17, son Joseph, age 15 and son William, age 4. The Whalton’s female slave and the sixth crewman of the ship are also on deck.
The image of the lightship Florida, is based upon a single construction plan of the ship and other details learned from contemporary accounts of the lightship. Many details of the painting are based on educated conjecture as there are no known images of U.S. lightships during this period.
The lightship Florida was built in 1830 as a replacement for the Caesar, an earlier lightship of the same design which served at Carysfort Reef from 1826 until it was declared unseaworthy as a result of dry rot. The Carysfort Reef lightship was stationed two miles inside the reef in an area that is today known as Turtle Harbor.
U.S. Lightship development was in its infancy in the 1830’s. The ship built for Carysfort Reef was unusually large (240 tons displacement) as the station was considered to be an exposed location where high seas could be expected. Of note, the ship’s design included two pairs of square masts, forming a foremast and a mainmast. Two large lanterns were suspended between each pair of masts at night to provide the “light” for the lightship. Inside each lantern a tray of 12 whale oil fueled wicks provided the light. Later lightships used lanterns which surrounded the mast. Shown on the foredeck is one of the ship’s two 2,800 pound mushroom anchors, as well as a 700 pound bell which would be rung at times of low visibility.
Midships, twelve 40-gallon oil canisters provided storage for whale oil for the lamps. A central cargo hold provided storage for water and other supplies. At the rail two sets of davits allowed the ships boats to be hoisted out of the water. The large size of the boats and small size of the crew (a Captain, Mate, cook and 3 crewmen) meant that the davits were infrequently used. An awning covering the cabin and after part of the deck were mentioned in period accounts. A Jacob’s ladder is shown at the ship’s side. While a more elaborate and safer boarding platform may have been used, a Jacob’s ladder was chosen for the painting to reflect the frugality of lighthouse operations of the time.
The rigging of the Florida includes a lightning rod, and “basket” day shapes on both of the masts. Day shapes were in wide use on lightships by the 1860’s as a means of identifying the ship as a lightship during the day, but their use as early as 1837 is based on conjecture. The presence of a bowsprit also differs from many later lightships. A bowsprit was noted in a report about the lightship made in 1852, after the ship’s rigging had been altered in preparation for moving the ship to a new station. The Lightship Florida served at Carysfort Reef until 1852 when the Carysfort Reef Lighthouse was completed. After being refurbished at Key West, the lightship sailed for a new station near Newport, Rhode Island. Developing a leak soon after departing Key West, the Florida stopped overnight at Carysfort Reef Lighthouse. Contrary winds led to the decision to sail to Charleston SC for repairs. The leak grew worse but fortunately the the crew was safely evacuated to passing whaler only hours before it sank north of the Bahama Islands on April 27, 1852.