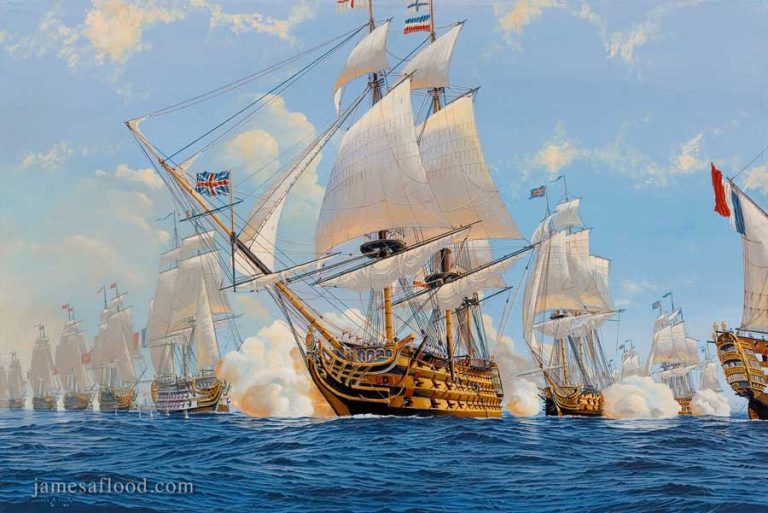 This painting portrays the opening moments of the Battle of Trafalgar, when two British divisions initialize separate but simultaneous breaches of the French and Spanish battle line. Admiral Nelson’s division has broken into the northern segment with his flagship, the HMS Victory. Further south, Vice Admiral Collingwood, aboard the HMS Royal Sovereign, leads the second division. As the battle continues, the French and Spanish ships to the south of the breaks will tangle up, becoming easy prey for repeated raking from the stream of fresh British battleships. At the same time, allied ships to the north of the breaks will sail on, unable to defend or attack as they are unable to turn about given the light wind. The result is utter havoc for the French and Spanish allied fleet, and victory for the British.

In this painting, foreground center, HMS Victory is depicted breaking the line as she rakes the French ships Redoubtable and Bucentaure. To her starboard side, in the background, smoke marks the position of the second division’s entry. In the distance Vice Admiral Collingwood, leading the second column aboard the Royal Sovereign, is already engaged in exchanging fire in the second breach.

Some interesting and lesser-known events surrounding the Battle of Trafalgar