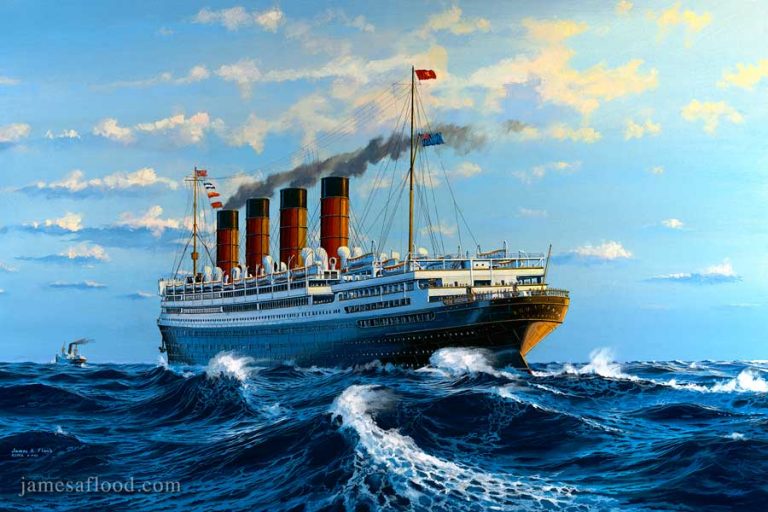 Built by John Brown and Co., Ltd., RMS Aquitania took her maiden voyage from Liverpool on May 30, 1914. She was 901 feet long and 97 feet wide, with a service speed of 23 knots, and was designed to carry 3,230 passengers. This last four-tunnel liner was ornate in her decor, with design periods ranging from Charles II to Louis XVI. First class staterooms brandished elegant furniture and British art reproductions, while her famous Palladian Lounge displayed a huge eighteenth century Dutch master oil painting on its ceiling.

Built for Cunard Line, RMS Aquitania serviced Southampton-New York. Shortly after her launching in 1913 she was commissioned into World War I as an auxiliary cruiser and then as a troopship, carrying over 30,000 troops in a three month period. She also served as a troopship in World War II, making her the only Cunard ship to serve in both world wars. When not at war, she resumed her transatlantic services and was quite popular, especially among the rich and famous. In the end, she logged over 3 million miles and 1.2 million passengers in her lifetime.

Aquitania remained in service after the merger of Cunard Line with White Star Line in 1934. Her service ended in 1949 and she was scrapped the following year.

This painting shows this beautiful four funnel liner approaching New York in 1924. As a point of interest, the artist’s aunt and uncle met on board RMS Aquitania during WWII en route to England and married upon their return to the United States.

With no sister ships, RMS Aquitania belonged in a class of her own. The next liner to be built for Cunard was RMS Queen Mary.