Shamrock V​ and other Yachts Racing in the Solent, 1930s 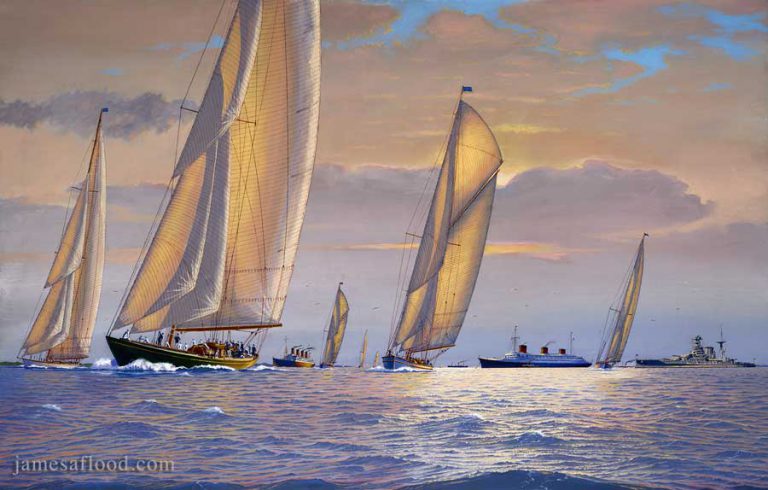 Shamrock V Racing in the Solent

Sir Thomas Lipton, a man respected in both England and America for his great sportsmanship (as well as his tea), built Shamrock V in an attempt to win the America’s cup. This was the fifth vessel that he built for this endeavor and completed shortly before his death in 1931. His sailing  vessels, all named Shamrock, were always painted a fine dark green. Shamrock V still sails and is available as a luxury charter yacht. Although the many years have seen numerous modifications, later refurbishment has pursued keeping true to her original visual styling.

In this painting the year is 1935 and many J-boats had adopted the triangular Marconi mainsails. Here, Shamrock V and other J-boats are racing in the Solent.  As the 30s came to an end impending war intervened, the J-boats ceased engaging in friendly rivalry.

In the background the brand new SS Normandie, of the French line, has anchored to load passengers. Sharing this background, HMS Barham, a British battleship, serves as the committee ship. In the distance, Cunard Line RMS Scythia and RMS Aquitania move towards the horizon as they commence fresh voyages.

The original painting can be viewed on board RMS Queen Mary 2 in the Commodore’s Lounge on 9 Deck.