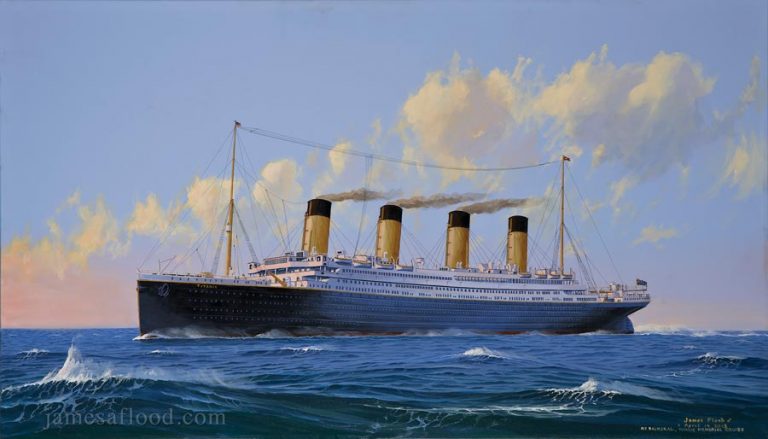 In April of 2012, James and his wife Tina departed Southampton on board ms Balmoral to take part in the Titanic Memorial Cruise. Throughout the cruise, James painted Titanic Sunset in the ship’s atrium while passengers looked on. Near the end of the cruise a silent auction was held in which the painting was sold, a portion of the proceeds going to the Mission to Seafarers.

The highlight of the cruise was the memorial service that was held over the area where RMS Titanic had sunk 100 years before. The air was very cold, and the night very dark, but clear, with just a sliver of a moon low on the horizon. About a quarter of a mile away was Azamara Journey, with her lights all gleaming, looking just like a large ship model. From aft came the sounds of hymn singing from the wreath service; Reverend Huw Mosford was officiating and Commodore Warwick was assisting. Over the fantail flew an enormous White Star house flag. At the peak of the ceremony opera singer Anthony Stuart Lloyd sang to the accompaniment of the ship’s orchestra. All the passengers, many in period garb, were silent and respectful. The cruise ended in New York after a two-day stop in Halifax, Nova Scotia.