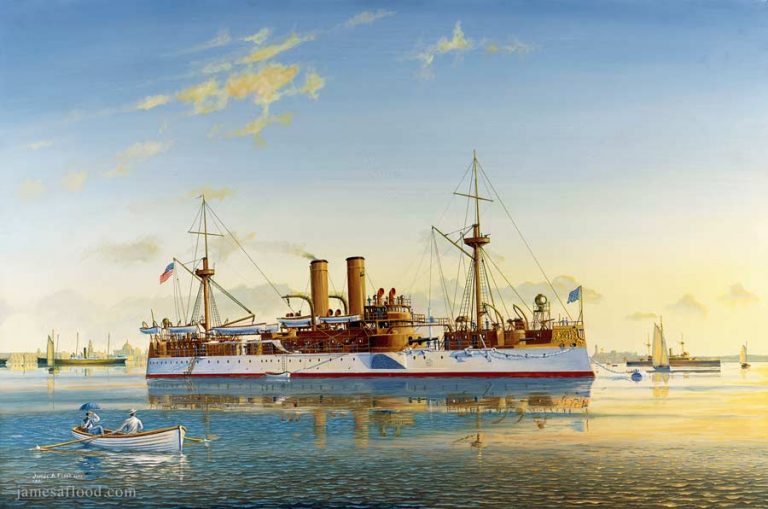 This fine art paper digital reproduction of an original painting by James A Flood is professionally manufactured in the United States of America. Artwork is printed at time of order.

This singularly beautiful second-class armored battleship was commissioned in 1895. Although built in the New York Naval shipyard, her design followed that of British war ships of the day.  Her original designation was that of Armored Cruiser 1 (thus ACR-1).  She was assigned to the North Atlantic Squadron where she maintained East Coast operations until 1897. Having completed the appropriate training in Key West, she joined the forces developing off the Coast of Cuba, as the struggle between Spain and the revolutionary forces of Cuba heightened. She arrived in Havana on January 25th of 1898. Tragically, on the evening of February 15th, her entire forward part erupted in an explosion which ultimately killed 260 of the 350 aboard.
Although she was raised for investigation in 1910, the true cause of the explosion was never resolved to everyone’s satisfaction, and remains a mystery. In 1912 a ceremony was held with honors in the Gulf of Mexico. Here her remains were solemnly sunk.
USS Maine is depicted here in this painting showing the flag at Havana in 1898 on the first morning after her arrival.