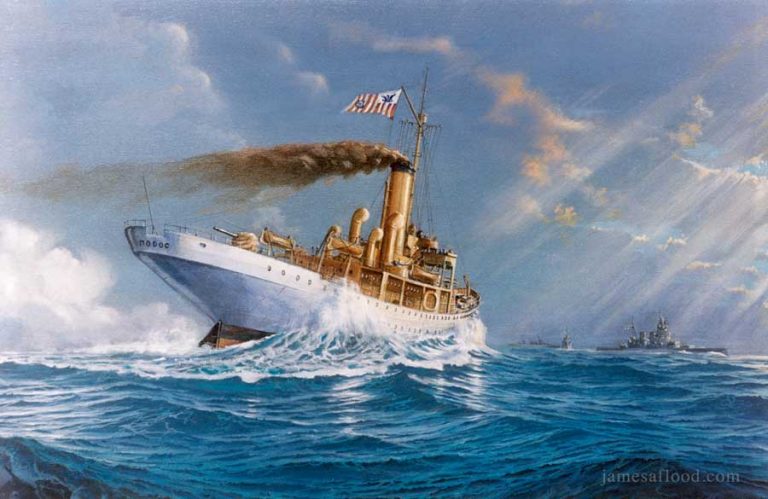 In maritime battle history, much has been written about the interception and sinking of the Bismarck. In a four-day battle sequence riddled with stories of the unexpected, one of the most dramatic is that of the US Coast Guard Cutter Modoc. She was a very small ship caught up in the middle of a very big battle. Fog, mistaken identity, and providence all play a role in her singular wartime adventure.

On May 24th, 1941, USCGC Modoc, whose mission was to patrol allied convoy lanes for survivors of German U-Boat attacks, is heading east in the Denmark Strait, tracking the remains of an eastbound convoy. When twilight arrives, the crew observes a huge gray vessel heading rapidly southbound. It is HMS Bismarck, recent from battle with the British blockade where she succeeded in sinking the HMS Hood. Damaged from the engagement, she is moving full steam ahead now, her guns trained on the centerline. By doing this, she is attempting to outrun or outfight the vengeance-driven British Fleet and escape to the Atlantic. Overhead, fighter aircraft from the HMS Victorious are in hot pursuit and begin their attack on Bismarck. Flaming remnants fall all too close to the small cutter, compelling her to rapidly seek an escape route.

As Modoc attempts an exit, her situation becomes even more perilous. Because the British commanding officers on the pursuing battleships are unaware of Modoc’s presence, they are unable to identify her. The British have just lost the Hood and are on the lookout for sneak maneuvers from the Germans. Any unknown vessel is suspect. Not willing to take any chances, preparations are made to attack. HMS Prince of Wales takes aim, awaiting the signal to fire.
With huge guns pointing directly at her,  Modoc turns towards the protection of a nearby fogbank. Her pounding antiquated steam engines, forcing huge clouds of black smoke through her buff funnel, do little to boost her inherent slowness. But onboard HMS Prince of Wales, the signal flag acknowledging the order to commence fire jams, delaying the firing of guns*. Before the issue is resolved, Modoc vanishes into the safety of the mist. She survives unscathed and later returns to her patrol, lasting throughout the war.
*First Lieutenant and senior survivor A.G.Skipwith in describing the incident stated that Prince of Wales twice rejected their Admiral’s order to fire because they were able to recognize that Modoc was not an enemy ship. The following links go into detail about the ship and her adventures: