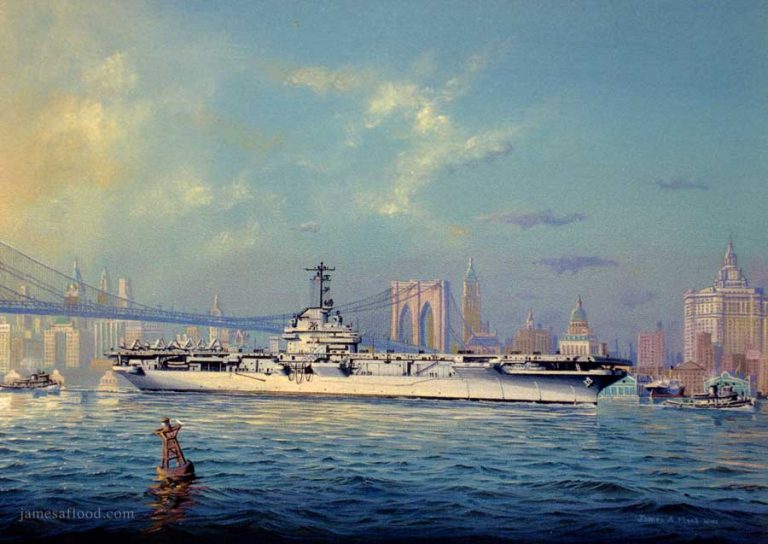 Although USS Oriskany had multiple accidents in her career, the best known is that of a fire that broke out on an October morning in 1966 while the ship was deployed in Vietnam, killing forty-four men. An exhausted and undermanned crew, inclement weather, and repeated flight operation cancellations were some of the factors leading up to the disaster. Two young sailors (inadequately trained in handling ordnance) were given the task to complete removing parachute flares from the planes and into storage in the flare locker on the ship. Instead of properly transporting the parachute flares into storage they began tossing them. One flare ignited. One of the two crewmen, in a panic, threw it into the locker and closed the hatch. The locker immediately blew up, the fires spreading through to multiple munitions. Having suffered much damage and loss of life, USS Oriskany was removed from the line. After extensive repairs at Hunter’s Point Shipyard (California), the ship returned to Vietnam for service.
In 1976, she was decommissioned and after multiple transfers ended up back in Navy hands. The N.I.F. then contracted ocean engineer Bob Pittman to initiate plans for a survival mooring for the ship.

The following account is derived from a real-life story by Bob Pittman—Begin Account:
Due perhaps to her tragic history, or perhaps her ethereal residents, “Mighty O” was considered by many to be a haunted ship.
When Bob ventured out to inspect the ship he was surprised to find that no one in the scrapper’s staff was willing to board the ship with him. Dropped off at the ship’s berth, Bob traveled into the ship’s interior, eerily dark as there were no lights. All he
had was his flashlight and the knowledge of a job to do. Fortunately he knew his way around inactive CVs (carriers). Bob notes that while working his way up to the foc’sle, he was enveloped in a strange coldness. When the hairs on his neck stood on end
he realized how terrified he was. (Note: Bob did not know it at the time but later learned that this was the area where many who perished were trapped in their berthing compartments at the time of the fire). It was then and there that he made a promise to
Mighty O’s Angels (those left behind in the 1966 accident) that he would take nothing from the ship – that he was just there to do a job for his client and their ship. Once his endeavor was completed, he gave a call to his escort for the return trip. He thanked O’s Angels as he left, privately hoping never to see the ship again.
It was not too long, however, that the NIF asked Bob and his team to design and be prepared to install a survival mooring for “Mighty-O” in Pensacola, FL (by then, arrangements had been made to donate the ship to the state of Florida to be used as an
artificial reef). Feeling it was not a good choice due to the chance of hurricanes the team was able to convince NIF that a preferable location for temporary berth was MARAD fleet in Beaumont, Texas. Then came Hurricane Katrina! Fortunately, the
winds pushed Mighty O safely into a mud bank where she remained until being towed to Pensacola in preparation for her next career as an artificial reef. It was Bob Pittman’s friend, Bob Truston, who had the dubious distinction of taking apart and putting
back together the Monster Vryhoff anchors and laying out about a mile or so of the 3 ½ Di-lok chain required.
The “Mighty O” and her Angels are at rest now, but still serving their country, and honoring the legacy of those who served on
her.—End Account

Today the remains of USS Oriskany serve as an artificial reef in the Gulf of Mexico approximately 25 miles south of Pensacola.
In this painting the ship presents in her configuration as an aircraft carrier, portrayed in 1950s New York City area, passing under the Brooklyn Bridge in the East River between Manhattan and Brooklyn boroughs.