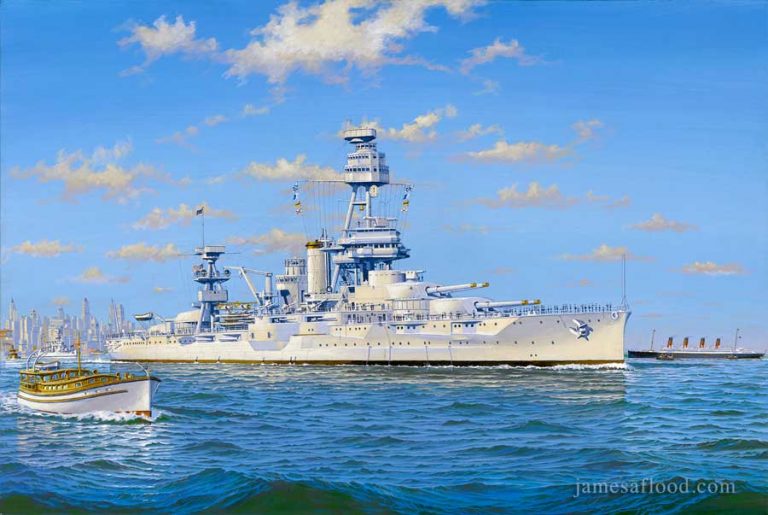 This magnificent ship, the only remaining dreadnought battleship in the world to be preserved of her era, is now moored at the San Jacinto Memorial, LaPorte Texas, where she is open to visitors. This painting shows her in her prime, paintwork spotless and brightwork shined, in her Atlantic flagship role. She is depicted in this painting departing New York Harbor around 1939.
Much like her sister ship USS New York, USS Texas was slow, hard to handle, poor in rough weather after her rebuild in 1926 and deemed in appropriate for first line war service (referenced from Jane’s Fighting Ships 1935). Consequently both ships spent much time as training ships and relegated to Atlantic service. Nevertheless, they both looked quite stunning in their pale gray peacetime livery.

Interesting connection between USS Texas and the Battle of Texel: How, one might wonder, did a pewter model of a 17th century Dutch flagship De Zeven Provincien end up on a 20th century United States battleship?

Apparently, in May of 1915, USS Texas along with some other battle ships was in position off the northeastern United States when a Holland American Line passenger ship SS Rijndam was rammed by a fruit steamer, Joseph J. Cuneo, just off the coast of Nantucket. The American battleships came at once to the aid of the passenger ship, rescuing 230 passengers. In appreciation, Holland America and the Dutch government presented both USS Texas and USS South Carolina with a pewter model of De Zeven Provincien. De Zeven Provincien had been the flagship of Admiral Michiel de Ruyter during the battle of Texel in August of 1763. It was to be the last engagement of the Anglo-Dutch Wars.

USS Texas keeps the model on display with the wardroom silver on board the battleship museum.

USS Texas is well-preserved and permanently moored in LaPorte, Texas, where she is open to the public for tours: