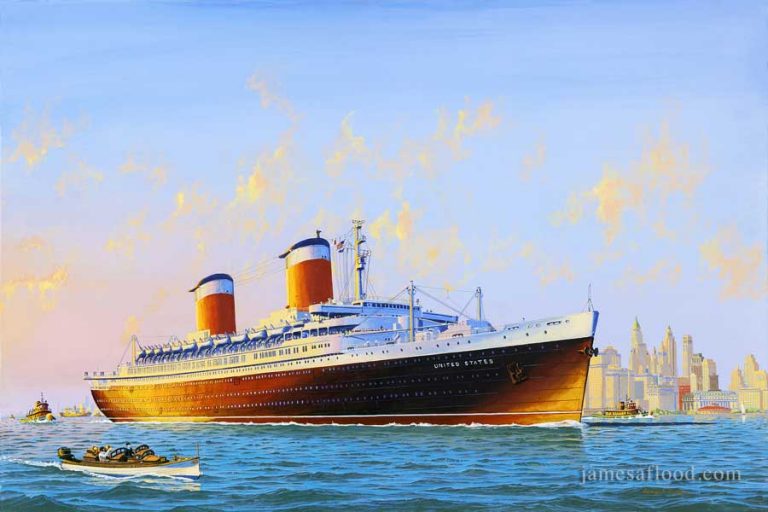 This fine art paper digital reproduction of an original painting by James A Flood is professionally manufactured in the United States of America. Artwork is printed at time of order.

SS United States was built in 1952 by Newport News Shipbuilding & Drydock Company, Newport News, Virginia.  She was 990 feet long, 101 feet wide, and carried a  weight displacement of 53,329 tons. Her steam turbine, quadruple screw engines ran at a service speed of 33 knots. This finely engineered ship was never pushed beyond ¾ power. However, rumor has it that she achieved the incredible speed of 48 knots on her trial run. The results, both those under cover (literally – a paper bag over the pitometer log) and those made public, document a speed record that remains unbroken to this day. She is, indeed, the last ocean liner to capture and hold the coveted Blue Riband.

Engineers used the most advanced technology of the time, making SS United States was the fastest ocean liner ever built.  She emerged from post war America a masterpiece and was a twentieth century ambassador of American spirit and innovation.

In this painting, SS United States is portrayed departing New York Harbor in the early years of her career, the historic towers of downtown Manhattan looming in the background, her vast hull gleaming in the late afternoon sun. Pictured in the foreground is the artist and his wife, moved backward in time to the 1950’s and motoring by in their hand crafted launch Duchess, paying homage to the great liner as they wave and take photographs. 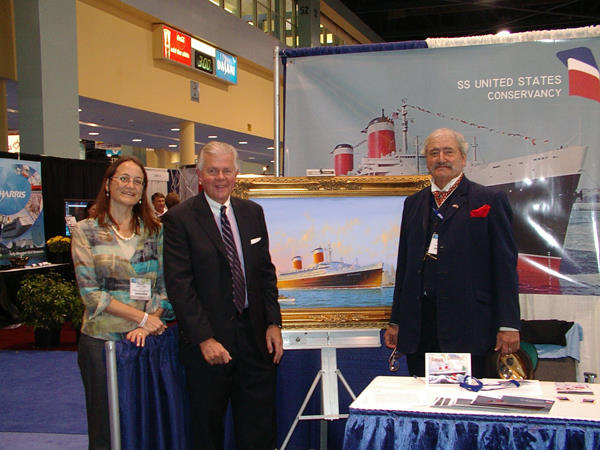