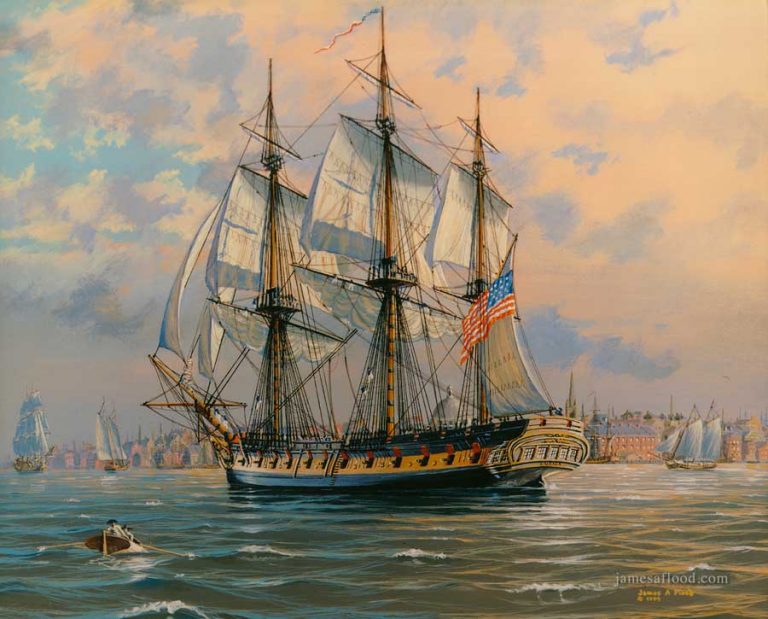 The Third USS Boston: In this painting by James A Flood, the second frigate Boston is depicted departing Boston Harbor, Massachusetts in 1804. The topsails have been set and the crew is in the process of loosing the courses. It’s a windy day, so the topgallants are still snugly furled. The outer or flying jib is set; the jib is furled; the forestaysail is set. The wind is off her starboard quarter.
Brief historical background:
USS Boston, a seaworthy three-masted 32-gun frigate, authorized by the Naval Act of 1798, was built by Edmond Hartt of Boston, Massachusetts. She was first commissioned in 1799 under the command of Captain George Little.
USS Boston is most notably known as the U.S. ship that captured the French corvette Berceau in the West Indies in 1800 while protecting US merchant ships from French privateers. USS Boston lost seven men in her conquest. Berceau, defeated, was towed back to Boston by cleverly devised rigging engineered by Lt. Robert Haswell. It was unknown by Boston’s crew at the time that a peace agreement with France had just been signed. Subsequently the United States was forced to repair and return Berceau to France.
Later, in 1801, USS Boston sailed Robert Livingston to France. Livingston was the newly appointed minister to France under President Thomas Jefferson. He is best known for his role in negotiating the Louisiana Purchase.
Attacks on American merchant ships continued, more so now from the Berber privateers, whose trade was to demand tribute from ships whose countries were deemed too weak to defend themselves. Jefferson refused to pay, and to protect her merchant ships, the U.S. reconstituted the Mediterranean Station off the coast of Tripoli. USS Boston, under command of Captain Daniel McNeill, was among the ships that were sent, Their successful attacks served to fully display the United States as an emerging naval power of consequence. USS Boston, however, was not to see the end of it. In 1802 the battle-weary ship was returned to Boston. Shortly thereafter she was taken to Washington, where she was decommissioned and laid-up. Near the end of the War of 1812, on 24 August 2014, USS Boston was destroyed to keep her from the hands of the British, who had that very day invaded Washington, later ransacking the White House and burning it down along with many other public buildings, an action believed to be in retaliation for the American attacks upon British colonies in what is now Canada.

Please note that USS Boston is a popular term only;  technically speaking, American Colonial and United States ships of war did not carry the prefix USS until 1907.